I’m going to digress to introduce an understanding of the Heisenberg Uncertainty Principle that might be related to the Riemann Hypothesis.

The Uncertainty Principle states that in the case of certain pairs of conditions of a particle, you can’t determine both accurately at the same time. The usual example is position and momentum. If you know the momentum of a particle, you can’t know its position and vice versa. What’s not often made clear is that it’s not just that you can’t know both. Knowing one means the other has no meaning. It doesn’t exist from your perspective. I’ll return to this in a moment.

The idea that two valid but incompatible results can exist describing the same physical situation was demonstrated by the ancient Greek philosopher, Zeno. Zeno’s paradox of an arrow in flight observes that in every timeless instant of the flight the arrow exists in some position in space. Since it is definitely there, it can’t be somewhere else. Since in that instant there is no time, it can’t be moving. Since at every instant of its flight the situation is the same, the arrow can’t ever be moving.

However, the counter arguments depend on certain definitions about infinity and the infinitely small that produce answers in line with what we observe. There is no other reason why Zeno’s definitions aren’t just as valid, and his conclusion is correct. That was his point. He was showing that either logic or observation or both have limitations.

This all became important again in 1927 with Werner Heisenberg’s Uncertainty Principle. It turned out that when you get to the very, very small, position and momentum are mutually exclusive concepts. The more accurately you know one of them, the less you can know about the other, and if you know one perfectly, the other no longer exists. I don’t mean you just don’t know what it is, I mean it doesn’t exist.

This is different from the famous measurement problem of Quantum Mechanics, which has to do with an observer interfering with a system by measuring it, thus rendering the measurement inaccurate. The Uncertainty Principle tells us something fundamental about the way the universe is built. Measuring these conditions doesn’t change them, it reveals them.

Heisenberg’s original paper expressed this in matrix algebra. I won’t go into the details (I’m not knowledgeable enough to get very far with it anyway), but here’s the general concept. The measurements of a particle’s momentum and position can be described by a related pair of infinite matrices of a type called Hermitian. These two matrices do not commute, which means that as you determine more exactly the values in one, the other one gets less and less distinct. In a sense, the two matrices become orthogonal to each other, i.e. at a right angle to each other.

Think of the worlds of momentum and position as two planes of glass in the sun with a bunch of numbers written on them in boxes like a giant tic tac toe game. (This is a matrix). These numbers represent the value of each. When you are not reading either set of numbers, the two planes lie on top of each other. As you start to read one of them, the other rotates up. They touch at a line at one edge, but a line has nothing written on it. All you know about the numbers on the other plane is its shadow on the plane you are measuring.

It takes time to read the numbers because there are a lot of them, and you have to write them down on something to remember them. If you write down the first few parts of the number, you can still read some of the numbers on the other plane from their shadows because the planes haven’t rotated very far apart at some points, but they are getting fuzzy. You can say you know approximately the value of each matrix. As you write down more digits, the plane rotates towards the vertical, and the shadows of the other numbers get fuzzier and fuzzier.

If you write down all the numbers on one plane and say you know exactly what they are, the other plane is now vertical and there is no shadow of those numbers at all. In the world of the one matrix, the other matrix ceases to exist. If we measure the position accurately, our world has only the position matrix in it.

The analogy is not great, because I have implied that the other numbers still exist on the other plane, you just can’t read them. The Uncertainty Principle says that it isn’t just the numbers that don’t exist, it’s the physical condition itself. The reality of exact momentum cannot coexist with the reality of exact position. Once again, it’s not that it’s there, and we can’t measure it; it doesn’t exist.

I’ll go back to the arrow. It’s much bigger than a sub-atomic particle, so this is just another analogy, not really the uncertainty principle. If we measure the arrow’s speed (momentum), we can no longer say it’s actually anywhere. If we measure where it is, we can’t say it’s moving at all. This is Zeno triumphant.

Of course, nothing is ever perfectly anything in our world, so the uncertainty relation has a limit that is non-zero, but it’s really small.

Finally, what does this have to do with the Riemann Hypothesis? Maybe nothing, but…people have observed that the known solutions to RH look like they might fall into values consistent with a Hermitian matrix.

For a matrix to be Hermitian, it must be square, its diagonal must be real numbers, and the rest of its numbers must line up so that each number is the complex conjugate of its opposite element across the diagonal. Two numbers are complex conjugate if they are the same except for the sign of their imaginary part. Any pair of numbers with the forms a + bi and a – bi is complex conjugate.

Here’s a small example with made up numbers. The actual RH matrix would be infinite and would contain the actual solutions to the Zeta function. 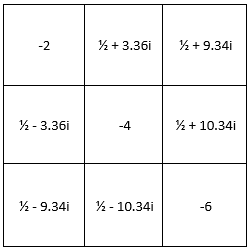 Still, it’s food for thought. I will chew on it next.